The ghost is not simply a dead or a missing person, but a social figure, and investigating it can lead to that dense site where history and subjectivity make social life.
(Avery F. Gordon, Ghostly Matters)

I don’t have the history that my appearance suggests.
(A woman quoted in Grada Ferreira [Kilomba], Placing the Black, Colonizing the Self)

Ghost Stories is about “haunting” as a way in which the past remains present in daily social life. The films and videos in this programme provide “a hospitable memory for ghosts out of a concern for justice” and they invite the audience to discuss the idea that haunting is “neither pre-modern superstition nor individual psychosis”, but rather “a generalizable social phenomenon of great import.”

This is using quotes from Avery Gordon’s study Ghostly Matters (1997) in which she boldly suggests that “to study social life one must confront the ghostly aspects of it”. For Gordon, welcoming ghosts to appear and to raise their voices becomes a matter of justice for the reason that haunting is not only “a paradigmatic way in which life is more complicated than those of us who study it have usually granted”, but more acutely a way “in which abusive systems of power make themselves known and their impacts felt in everyday life, especially when they are supposedly over and done with”. Ghost Stories is therefore not meant to deliver likable thrills and shivers, but rather to seek out ways to deal with the thrills and shivers that haunt our present societies – whether we like them or not.

A project like this finds itself grappling with what Jacques Derrida has described as the “responsibility of the heirs”. Himself struggling with the Specters of Marx (1993), Derrida realized that our mode of existence is fundamentally that of a heritage – whether we want it or not. A heritage – colonialism, communism, fascism, a liberation, a revolution, or more specifically, a name, a robe, a building, a graveyard, a shopping mall, a code of laws, or a coat of arms – always comes down to us as a mystery and as an obligation to filter, criticize, and select among the different possibilities evoked by it. A heritage therefore engages us with the future as much as it does with the past.

The films and videos in this programme are concerned with different contexts and heritages, and they use an eclectic range of narrative strategies and aesthetic approaches. Spanning these differences, however, is a shared scepticism that what is broadly accepted as History at any given moment is really the whole story, or the one that really matters. These works were urged into existence by the assumption that some of the most pertinent and reality-shaping aspects of the past are those which are not represented in the dominating narrative, which are denied, forgotten, repressed, forged, or romanticized. These are the ones most likely to come haunting; they demand visibility where we usually don’t look, because we believe, or have been told, that there is nothing (to see).

Much like ghosts and spectres, films and videos also exist by their ambivalent relation to visibility. When ghosts are things visible but not there, they share this fragile mode of existence with films: visible but not there; or there, yes, but in what sense? In fact (but what does it mean?), Derrida’s description of the spectre can also be read like an accurate characterization of film: “It is the frequency of a certain visibility. But the visibility of the invisible.” It “is, among other things, what one imagines, what one thinks one sees and which one projects – on an imaginary screen where there is nothing to see. Not even the screen sometimes.”

For a film therefore, to provide a hospitable memory for ghosts does not always mean to share its worn blanket of visibility with them. It can also mean, as we see in these films, to spread this blanket like a veil behind which the ghost will dare to speak, or to dye this blanket the abstract white of a screen. Because there is nothing to see, except this invisibility. 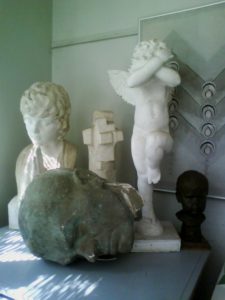